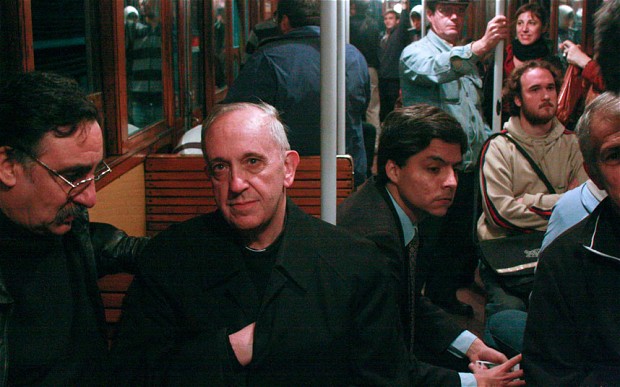 
According to the various testimonies gathered together in the volume, the future pope made sure no one knew who was part of a clandestine network that sheltered or shuttled to safety dissidents, unionists, priests, students, intellectuals, Catholics and others.

"Each person would do one particular favor for (Father Bergoglio) the head of the Jesuits in Argentina: one who would let someone sleep over for one night, another who would give someone a ride, one would put in a good word to a European consulate worker" in getting someone out of the country, said the Vatican paper, L'Osservatore Romano, Sept. 7.


Priests and seminarians thought the frequent visitors they hosted were on spiritual retreat or getting help with their studies as then-Father-Bergoglio had suggested, he said.

Instead they were priests, seminarians or students "who had ended up in the crosshairs of the dictatorship" and, in the provincial college or other residences, could find safety from being kidnapped by police.

"It took us years to realize the complete truth about Father Jorge's rescue efforts," said the priest, who is the director of the institute of philosophy at the Jesuit university and seminary in San Miguel.


Father Scannone, 81, who lived with the future pope during that period in San Miguel, said he saw firsthand the pope's efforts to help free the men.

"I can testify to the worry and commitment of the provincial Father (Bergoglio) in freeing both of them," he said.

"He told me what he was doing and the information he collected in order to discover who had kidnapped them and where they might be imprisoned," said the priest.

The future pope was able to gather enough information that would "pin the generals to a corner," and the two priests were eventually freed, Father Scannone said.

Father Bergoglio also helped them escape abroad afterward so they would not run the risk of falling victim to another tragedy, he said.